Noelia Belando and Raquel Pérez, students of the UMH, winners of National Awards for Excellence in Academic Performance

The students of the Miguel Hernández University (UMH) of Elche, Noelia Belando Pedreño and Raquel Pérez Sarmiento have received  in Madrid one of the National Awards for Excellence in Academic Performance for the 2009-2010 year.

The Ministry of Education acknowledges with this award the excellence in Academic Performance of the students who have just accomplished their undergraduate degree with  the highest average score in their  degrees.

The vice-rector of the UMH students, Francisco Javier Moreno Hernández, has attended the ceremony in which  runner-up prizes have been given to Noelia Belando Pedreño,  graduate in Physical Activities and Sports, and  Raquel Pérez Sarmiento,  diploma in Labour Relations. 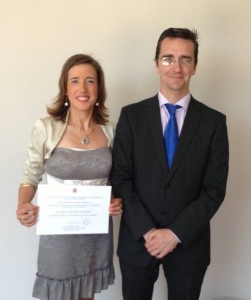